According to Ayurveda, this condition of keratoconus related to timira. In Ayurveda, all the eye disease is covered under the complex of ‘Timira – Kacha – Linganasha’.

Based on the symptoms of keratoconus, this is related to vataja timira. Vata is responsible for this disease. This dosha gets aggravated in this vata condition. The cornea is the site of vata dosha (i.e. why it is rich in nerve supply and no blood supply). Vitiated Vata dosha alters the shape of cornea making it thinner in the center, giving it a conical shape. There are certain ayurvedic formulations and therapies available here at Prakash Nethralaya, that has shown the positive effects to handle this condition.

According to Ayurveda, the keratoconus symptoms can be minimized with nethradhara, nasya, tharpana, Virechana, and Shirodhara.

The major procedures done for keratoconus treatment in ayurveda are - Nethradhara, Pindi, Anjanam, Shirodhara, and Tharpanam.

Keratoconus is a vision disorder that occurs when the normally round cornea becomes thin and irregular shaped. It is an eye disorder characterized by progressive thinning and changes in the shape of the cornea. Affected individuals can develop a blurred or distorted vision, sensitivity to light, and other vision problems. It often begins at puberty and mostly is seen in teenagers or adults. One factor known to contribute to the progression of keratoconus is eye rubbing. This abnormal shape of cornea prevents the light from entering the eye from being focused correctly on the retina and causes distortion of vision.

In its earliest stages, it causes slight blurring and distortion of vision and increased sensitivity to light. In a small number of cases, the cornea will swell and cause a sudden and significant decrease in vision. The swelling occurs when the cornea's bulging cone-like shape causes a tiny crack to develop. The swelling may last for weeks as the crack heals and is gradually replaced by scar tissue.

See your eye doctor if your eyesight is worsening rapidly, and leads to changes in your eye levels with the passing of time, which might be caused by an irregular curvature of the eye (astigmatism). He or she may also look for signs of keratoconus during routine eye exams. Your eye doctor may include various eye tests to detect the keratoconus.

The exact keratoconus causes are not known, although genetics and environmental factors are thought to be involved.

These factors can increase your chances of developing keratoconus:

Keratoconus symptoms and signs and may change as the disease progresses. They include:

There are mainly 2 types of glaucoma :

Along with keratoconus treatment in Ayurveda, Some Preventive measures and home remedies for keratoconus are as follows:

Lifestyle modification from unhealthy to healthy supports keratoconus treatment. This disease can have the chances of improvement by some minor lifestyle improvements: 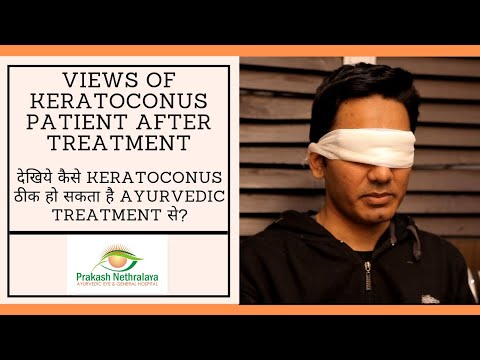